A vulnerability found in Microsoft Internet Explorer at the beginning of this week has now been patched. Internet Explorer 6 through to 11, on all versions of Windows including XP were left susceptible to attack.
Although recently telling users that they had ended support for Windows XP and would no longer be supplying bug fixes or security updates, Microsoft has also included a Security update for IE users on Windows XP.

Even though Windows XP is no longer supported by Microsoft and is past the time we normally provide security updates, we’ve decided to provide an update for all versions of Windows XP
We made this exception based on the proximity to the end of support for Windows XP. The reality is there have been a very small number of attacks based on this particular vulnerability and concerns were, frankly, overblown.

Although this security update has been released for XP, Microsoft are still encouraging users to move to newer Windows versions and use the latest Internet Explorer version.

Google Chrome Canary, the Google Chrome channel designed for developers and early adapters has made an alternation to its Omnibox.

Once a web page has loaded, the URL can now be seen in grey on the left hand side, allowing the user to search on the right hand side.

More recently, web browsers have started hiding the URL scheme. In iOS 7, Mobile Safari has hidden everything about the URL except the domain.

It is not yet known whether this will be in the public build of Chrome. To see these changes and experiment you can download the Google Chrome Canary Release from here.

Type chrome://flags in the ominibox to change the settings of different features.

Mozilla has released Firefox Version 29 for Desktop. This version of Firefox sees a major redesign of the web browsers interface as well as new features which allow a more efficient and customised browsing experience.

Some of these changes include:

Redesign of the tabs: A new curved and slimmed down tab design adds a new look to the browser, tabs not being used disappear into the background, with emphasis on the current tab.

Menu Button: Window's users will notice the Firefox button has been dropped in favour of a platform-wide menu button accessible to the right of the main toolbar and similar to that of Google Chrome’s.

Customisable Interface: A new clickable button-based menu has been added that is fully customisable, allowing commonly used menu items to be dragged to the main toolbar for quick accessibility. 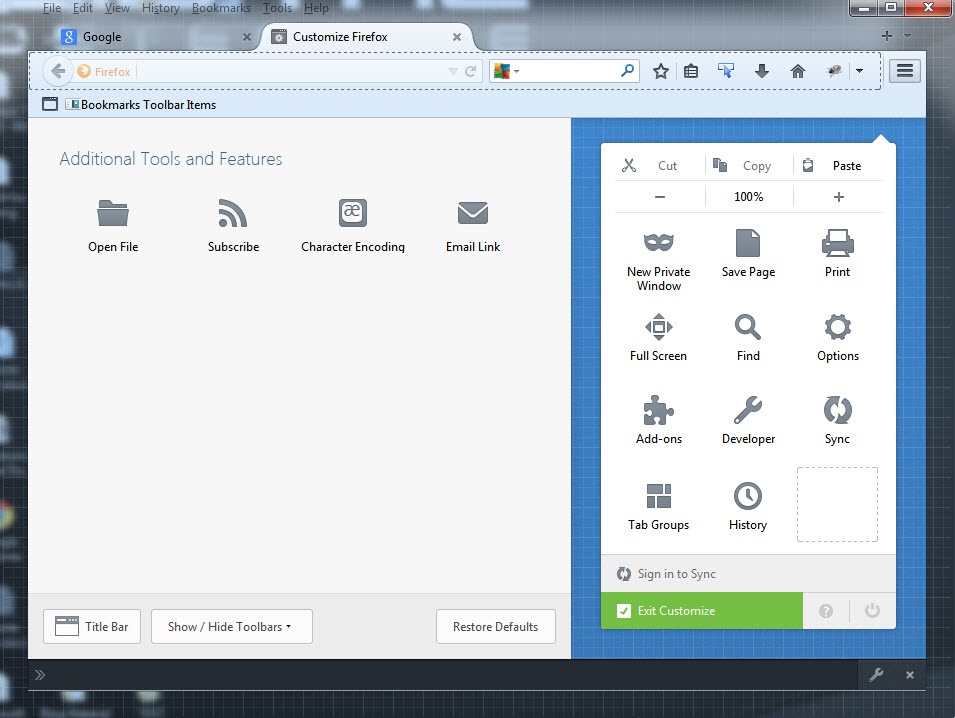 Sync: Mozilla has also launched Firefox accounts, which provide a new way for users to synchronize their data, such as bookmarks, history and passwords between multiple devices running the Firefox web browser.

Microsoft announces vulnerability in Internet Explorer web browser version’s 6-11. The vulnerability is a remote code execution vulnerability which if exploited can lead to hackers gaining access and user rights to consumer’s computers.

Microsoft has released a Security Advisory 2963983 explaining the vulnerability.

Internet Explorer 6 through 11 are vulnerable, on all versions of Windows from Vista to 8 and Windows Server 2003 to 2012 R2. Microsoft has suggested a few workarounds in its Security Advisory which will not correct the underlying issue but will help block known attack vectors before a security update is available.

Opera Coast for iPhone, now out in the App Store
Matilda Cowlling posted on Apr 24, 2014

Like everyone who owns an iPhone, I’ve often picked it up when waiting for something or someone.

I was never quite happy with how apps and browsers kind of got in the way of the content. With Opera Coast, we have made content the main star of the show, letting the browser app itself get out of the way when you just want to kill some time. It’s the way the web was meant to be enjoyed.

In light of the recently reported OpenSSL vulnerability, Heartbleed, Opera has released an update to its latest Opera Presto version 12.16.

Sigbjørn Vik an Opera Developer discusses why the update was necessary:

"Even though Presto does not use any vulnerable parts of OpenSSL, the standalone autoupdater for Opera 12 on Windows does. However, the autoupdater will only connect to our server, and close the connection if the certificate does not validate, so the certificate holders are the only ones who can abuse it. If someone should have stolen our certificate with a heartbleed attack against our servers, they might potentially use it against the autoupdater. The autoupdater runs in a separate process, and doesn’t have much memory to leak, but might potentially leak system information in such a case, such as local username on Windows machines."

Opera 12 for Windows will update itself automatically. Mac and Linux are not affected, and will not receive a 12.17 update.

Mozilla has set up a new program which aims to transform a user’s first time experience with Firefox through experimentation with promotional tiles in the ‘new tab’ page.

The new tab page when opened for the first time after installing Firefox or clearing down history displays 9 empty tiles. Over time they populate with the most frequent and recent websites a user visits. With the introduction of this new program Mozilla will instead display Mozilla based links and sponsored tiles.

Directory Tiles will instead suggest pre-packaged content for first-time users. Some of these tile placements will be from the Mozilla ecosystem, some will be popular websites in a given geographic location, and some will be sponsored content from hand-picked partners to help support Mozilla’s pursuit of our mission. The sponsored tiles will be clearly labelled as such, while still leading to content we think users will enjoy.We are excited about Directory Tiles because it has inherent value to our users, it aligns with our vision of a better Internet through trust and transparency, and it helps Mozilla become more diversified and sustainable as a project. While we have not worked out the entire product roadmap, we are beginning to talk to content partners about the opportunity, and plan to start showing Directory Tiles to new Firefox users as soon as we have the user experience right.

A major reinvention for the Opera web browser was the release of Opera 15 in 2013 where it dropped its own Presto rendering engine in favour of Google Chrome’s rendering engine, Blink.

This was widely publicised in Opera’s News:

"Today we released the latest and greatest version of our desktop browser for Windows and Mac. Opera 15 marks the next stage in our evolution towards a consistently better browsing experience on your computer. (Note: it’s not an auto-update, so you will have to make sure to download the new version yourself.)"

This new version saw a completely re-designed user interface as well as a number of new features. A distinctly new feature to the Opera browser is the Stash feature, Opera’s new take on bookmarking. This feature records the location, meta-data and screen shot of a webpage. It places this information into a collapsible list entry on the browsers start page that can be searched by keyword or scanned visually by the webpages snapshot. It allows a user to visit a webpage and keep it in their stash for quick accessibility on another browser session.

"We found that modern browsers are hard to do research in. You open tab after tab (comparing different shopping items for instance), and after a while you can’t keep track of what’s where. Sessions and tab stacking attempted to help, but also confused a lot of users, adding extra UI complexity. So we came up with Stash, which is a vertical overview of items you’ve added with super-fast full-text search, so you can compare and filter. This limits the amount of tabs you need to have open, reducing the number of running processes.Thus far, we’ve seen people using Stash in different ways to improve their browsing workflow, so we’re excited to see where this will go!"

Opera runs a rapid release cycle and since the release of the new Opera 15 have introduced several streams to allow users to keep up to date with the latest developments. These include:

•    Opera (Stable) – Released every couple of weeks, this is the most solid version, ready for mission-critical daily use.

•    Opera Next – Updated more frequently than Stable, this is the feature-complete candidate for the Stable version. While it should be ready for daily use, you can expect some bugs there.

•    Opera Developer – A bleeding edge version, you can expect a lot of fancy stuff there; however, some nasty bugs might also appear from time to time.